I am currently at work on a second, single-authored book on diaspora management logics. The book is building on various diaspora-related projects I have been involved with. I recently co-edited a special issue on “The Microfoundations of Diaspora Politics: Unpacking the State and Disaggregating the Diaspora” for the Journal of Ethnic and Migration Studies (2019) with Alexandra Délano Alonso from the New School. The articles we published offer insight into my book project and helped me test my intuitions against cases that I was not familiar with, such as Morocco, Germany, and El Salvador. In the same special issue I published a co-authored article (w/ Marko Žilović) entitled “Foreign Policy Priorities and Ethnic Return Migration Policies: Group-Level Variation in Greece and Serbia 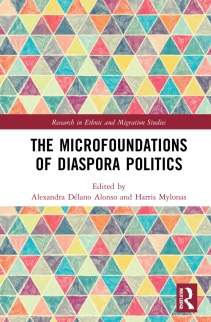 ,” which was awarded an honorable mention by the American Political Science Association’s Migration & Citizenship Section for best paper on migration and/or citizenship presented at the 2017 annual meeting. This special issue was published as a book with Routledge in 2022.

In 2013, I spent a month and a half in Seoul, at Korea University, researching South Korea’s diaspora policy. I conducted over 20 interviews. A policy memo on the politics of diaspora management in the Republic of Korea was published with The Asan Institute for Policy Studies, one of the leading think tanks in the country.

In 2010, “Ethnic Return Migration, Selective Incentives, and the Right to Freedom of Movement in Post-Cold War Greece,” appeared in a volume edited by Willem Maas, Democratic Citizenship and the Free Movement of People.